A friend described our internal self-talk wonderfully one day. She said something like this, one minute you are looking at the sky as you hang out the washing, admiring the clouds, you feel a breeze and turn around and see a black cloud, all of a sudden you begin to think, damn, should I bother putting the rest out, should I take it all in, or should I keep putting it on the line? I have to pick the kids up in five minutes, what if its only a two second shower, is it really worth bringing it all in, I have to go shopping with the kids after I pick them up, if it rains for ages, then I have just ruined this load, leave it or take it in?
As her heart began to pound and all of a sudden she said it felt like a volcano is hanging over her head and about to erupt and everything in the world will be destroyed and covered in lava, and she would be the guilty party of course, just because her clothes may or may not have to be washed again.

She said she defeated this by skipping to the ‘what is the worst that could happen’ scenario in her head and then let it go. She realised it is the looming volcano that gets you hot and bothered, and over the silliest of things. If you skip straight to the end, you realise that the worst that could happen is you have to just wash the clothes again, and the best case scenario, you don’t.

But worrying either way is not worth the heartache. Unless the heartache is real, some worst case scenarios are soul shattering because life events are overwhelming, but most of the thoughts we have that trigger these magnified feelings, are not coming from those situations, but just being overwhelmed by a to do list.

I often tell my clients certain phrases, within a story they tell me about their thought patterns, they often laugh when they do, because of nerves or embarrassment at how ridiculous their thoughts can be, when they say them out loud and realise how irrational and silly they are they relax instantly, and laugh, but internalised when alone, they can trigger massive anxiety.

So, when my client laughs at how silly their torturous thoughts are, they are calming their own nerves. We laugh to calm down, isn’t nature awesome, yet sometimes also difficult, like when you would laugh at school when you shouldn’t, and got into trouble for it, all just natures way of chilling you out. Thank you nature (most of the time).

Back to the point, I take a phrase that they say, or make a phrase from a scenario they found humour in and ask them to alter the voice and tone of the thought/phrase, so it is sillier, and I ask them to earwig into their thoughts over the next week, and observe their body language, if they feel themselves sighing hugely and slump, to listen in. If that thought was bringing you down, physically and mentally. Was it being totally irrational? If so, say your silly phrase, and bring the humour in, the natures calming effect and then redirect your thoughts.

Because of my friends story, I can hear the phrase- ‘Dude, there is no lava’, if my thoughts wonder of on a miserable life of their own, and I automatically I envision myself running from an erupting volcano laundry in hand, with a washing line trailing behind me like a veil, pegs popping behind me…

Your thoughts have the power to harm you, humour you, give hope to you, and help heal you.

You CAN be your own light at the end of the tunnel, you can even get your friends help without them even being there.

Your thoughts are powerful, when you realise this, your life will change. 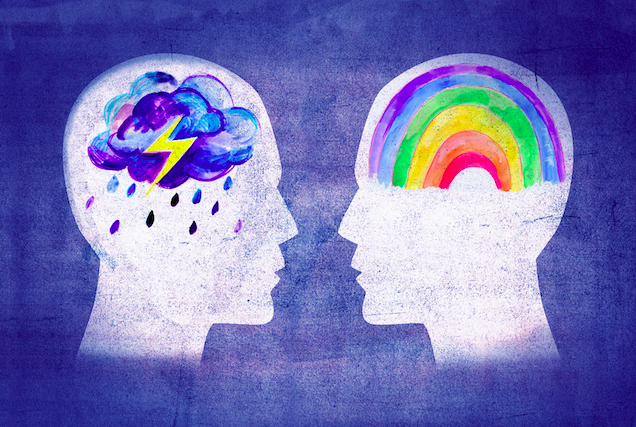